What You Should Not Do in Berlin: Travel Memo

Berlin is a multicultural city, cosmopolitan and with a spirit of freedom. Some people spend their entire night zooming from club to club, others are day people who like to go sightseeing, while there are those who prefer hanging out in the kebab shops. And you can be sure that they all have a great time and get to know the city in their own way. We now continue our thematic weeks and today will tell your clients what they should not do in Berlin.

Just a few years ago, it was a bit of a nightmare trying to pay without cash in Berlin. Since then, the situation has improved markedly. An increasing number of outlets now accept bank cards, including contactless ones. Further, Android Pay and Apple Pay were finally launched at the end of l2018 after much waiting. Nevertheless, even today you still cannot pay by card in some places. So advise your clients to have some cash.

Visit during the winter

If your clients are going to visit in the winter they risk not fully appreciating Berlin. Unlike many European cities that boast great visibility and bright lights, Berlin is poorly lit. This is caused by the best of intentions: excess artificial light has a nasty impact on the birds, so the city authorities decided to light the city as little as possible — just the little that was needed to allow people to get around. Their feathered friends are happy, but the tourists and the locals less so. The local government recognizes the problem and agrees that the streets are too dark and they have to do something about it. It’s not just that the number of streetlamps is insufficient, but also that many of them were erected over forty years ago and don’t provide enough light. Due to the dark, which in winter becomes noticeable around 15:00-16:00, travelers won’t see much walking around town, meaning that they’ll have less time to take in the city’s sights.

The only possible exception in the winter season is December when your clients will encounter a number of Christmas fairs and the city is decorated in festive illuminations.

So, when’s the best time to go?

Well, a great time to visit Berlin is when the sakura (Japanese cherry trees) blossoms, which is around April. The city is transformed when this happens. Sakura first appeared in Berlin in 1990, when Japanese TV company TV-Asahi, inspired by the reunification of Germany, announced a campaign to raise funds to buy as many sakura nursery plants for Berlin and the state of Brandenburg as possible. The Japanese were so enamored by this idea that they donated 140 million yen (around one million euros). Thanks to these funds, 10,000 trees were planted in Berlin and Brandenburg as a whole over the following twenty years. The sakura now blossoms in many locations, but it was initially planted where the Berlin Wall ran. As a result, sakura became a symbol of the country’s reunification and renewal.

Where to admire the blooming trees:  in Treptower Park, by Lohmühlenbrücke Bridge in Neukölln, in Hochbaumstrasse Street in Steglitz, and in the district of Kollwitzkiez in Prenzlauer Berg. 1,100 trees stand where Berlin borders the Brandenburg town of Teltow, which were also separated by the Berlin Wall. The street with sakura is now named “Cherry Alley-TV-Asahi” (TV-Asahi-Kirschblütenallee). Another 1,434 trees are located in a park in Lichtenberg called Landschaftspark Nord-Ost.

Hop-on Hop-off tour buses appear at first glance to be an excellent way to discover the city: you only have to buy a ticket once, and after that, you can get on and off these buses as much as you like (the ticket price starts at €24). This saves you time, and you will be sure that the bus will stop by the city’s main sights. However, Berlin also sports city buses numbers 100 and 200 that equally deserve the title “tour buses.” They follow the same route that all tourists can be expected to travel: Berlin Zoo, Tiergarten, the Reichstag and the Brandenburg Gates, Berlin Cathedral and Alexanderplatz. A but the trip will cost you €2.80, around one-seventh of the price of an official tour bus! This ticket is valid for two hours and you can get on and off without limitations.

Recommend your clients to check out this website to compare the bus routes of buses 100 and 200 and then pick the most appropriate one.

Nowhere follows the rule that you mustn’t work on Sundays as strictly as Germany. Here this is a law in the most literal sense. Just about all shops are banned from opening on the last day of the week. And while you can purchase something to eat in Berlin on Sundays in ordinary food outlets, at train stations, gas stations or Späti (little shops selling the bare essentials that are open at weekends and until late), you can forget about the pleasures of shopping. Therefore, make sure you buy everything else earlier. 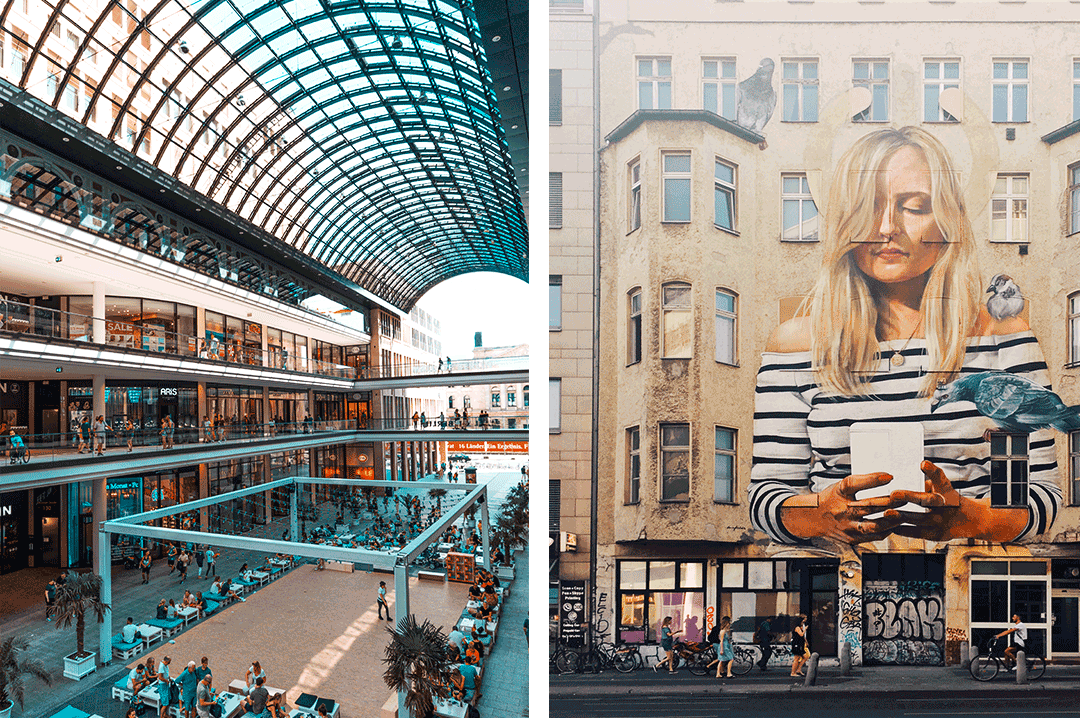 Actually, there are exceptions to this rule: shops in Berlin open on Sundays eight times per year. This happens on key dates when a multitude of tourists descends on the city: before the Berlinale, Berlin’s International Travel Trade Show or in the run-up to Christmas. To find out which Sundays are “open for business” in 2022, take a look here.

Much has been done in Berlin to make it easy to travel around by bike. So if the weather allows, advise your clients to take a cycle ride. Sometimes this is even easier and faster than taking public transport. And they even can sign up for a cycle tour (for example, a Berlin Wall excursion or exploring street-art). The price of a standard tour varies from €20 to €30. There are several bike-sharing networks in Berlin (Lidl, Deezer and Donkey Republic, while Uber’s electric bike rental service Jump is also being rolled out), but the most convenient choice for tourists is the Mobike network. These orange bikes are ubiquitous: 20 minutes on a Mobike will set back just €1. For a longer trip, it’s best to rent a bike.

View the city from the TV tower

One of Berlin’s symbols is the Fernsehturm TV tower on Alexanderplatz. Travelers enjoy ascending to the top and admiring a panoramic view over the city. However, there are plenty of other locations from to observe Berlin from up on high while avoiding the swarm of other tourists.

Moreover, a ticket to the tower will set you back €16.50, and you will still have to wait in a queue at that price (even if you purchase your ticket online), as the number of people allowed at the top at once is limited. To reach the top without queuing, you will have to fork out €21.50. So, advise your clients to check out these locations: the Victory Column in Tiergarten (Siegessäule) for just €3 or even for free from Viktoriapark; Monkey Bar (Budapesterstraße 40) for the cocktails and views over Berlin Zoo and nearby districts. By the way, this bar was named after its famous toilets with transparent walls through which you can view marmosets living in the zoo (and they see you too… yeah, right…).

What about the airport?

Note that Berlin Schönefeld Airport is located in Berlin’s third zone, so if you want to travel there you need a ticket with zones ABC.

Eat currywurst in a restaurant

Currywurst is a dish whose fame extends far beyond Berlin but which was invented in the city. It first appeared in 1949, and in 1959 the sauce’s recipe based on ketchup and curry powders was patented. There is even a museum dedicated to the product in Berlin (Deutsches Currywurst Museum), while sausages and potatoes with the famous sauce can be tried in any part of town.

However, don’t think that the only authentic currywurst will be served in a restaurant. This is a common mistake, as currywurst is simple street food originally contrived as fast food.

How much should you pay?

The price varies from €2 to €4. This dish is hard to improve or ruin, so feel free to try it anywhere. One of the best-known outlets is Konnopke’s Imbiß (Schönhauser Allee 44B), which has been owned by the same family for four generations.

Berlin is a city organically combining the dramatic story of the twentieth century and modernity. Here, night clubs are found side by side with classical music, fast food joints on every corner intermingle with restaurants offering all sorts of ethnic cuisine, and art galleries with some of the world’s greatest masterpieces co-exist with the liveliest street-art scene in Europe.

Tags: Germany
Go to the top